And Get On The Fast-Track To Building Your Portfolio

Have you been thinking about getting into boudoir? Or, have you already started but found it hard to build your portfolio?

TFP shoots can be a total bust if you don’t have an effective agreement that spells out what both you and your “model” are getting, and what they can and can’t do with their images.

My Model Tried To Sell Her TFP Images!

I once did a TFP shoot where I later learned that my model intended to sell her images to a third party!

Now, whether it was ignorance or underhandedness I had to let her know that what she was planning to do was illegal because she didn’t own the copyright to those images — I did. As the photographer who created them, the copyright automatically belonged to me.

She would need written permission from me stating I was giving her the right to sell those images. In effect, I’d be handing over my copyright to all those images for her to profit from in any way she saw fit, cutting myself out of any compensation whatsoever!

Not a situation you want to find yourself in, so my agreement prevents this scenario from ever happening.

Don’t Get Taken Advantage Of

Here’s a situation I learned of from another photographer.

It concerned a woman who, some time after her TFP shoot, wanted all her images removed from the photographer's website and social media and taken offline completely.

But since there was no written agreement that addressed this predicament, the photographer and model were at odds trying to resolve it.

Finally, a solution surfaced that since the model was breaking her part of the trade agreement, it was only right she now pay the photographer the cost of a full-price photo shoot.

This compensated the photographer monetarily since being compensated to use the model’s images was being stripped away.

This sounded like a fair solution, so I made sure to include it in my TFP agreement as well.

Something To Think About

As you can see, a simple TFP shoot can get messy if you don’t have an agreement that sets boundaries and clearly states what the model can and can’t do with her images.

So, after all my experience in doing trade shoots, and learning of other messy situations, I slowly added to and amended my TFP agreement over time.

Today, if I want to practice a new lighting set up or shoot in a new space, I know that using my TFP agreement will guarantee me a smooth and hassle-free session with my model.

And now I’m making that same agreement available to other boudoir photographers to use in their businesses as well.

I call it my Ultimate Boudoir TFP Agreement. 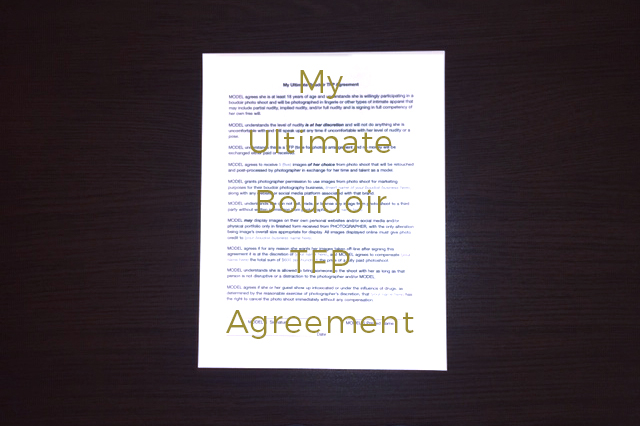 Here’s what’s in it:

States model can not sell, trade, or license her images to a third party giving you incredible legal leverage if you ever find out she did

TFP shoots were a shortcut for me to build an online gallery of images I could use to quickly start charging for my boudoir services.

But over time, it became apparent that a key ingredient in doing that was to use an agreement that set expectations for the model, while at the same time, protecting me and my work from getting taken advantage of.

Now you could try and figure all this out on your own, wasting valuable time and hundreds of dollars on studio fees, makeup artists, and other expenses — or possibly lose thousands of dollars if your model goes off and sells “her” images for big bucks cutting you completely out of the deal!

But you can avoid all that by protecting yourself with My Ultimate Boudoir TFP Agreement for just $27.00 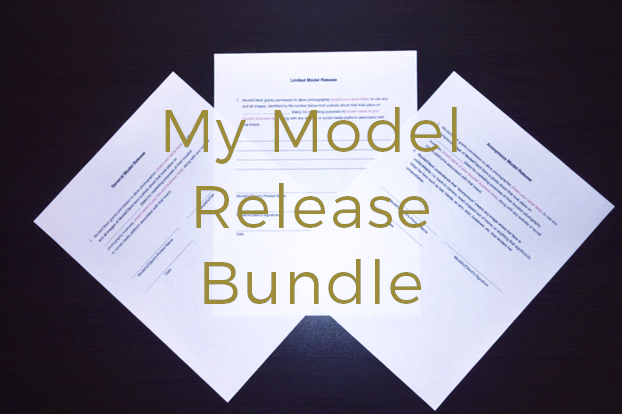 And as an added bonus, I’m throwing in My Model Release Bundle absolutely free!

That’s right, I’m including three variations of my model release which I call My Model Release Bundle so you can use images from paying clients as well!

You see, My Ultimate Boudoir TFP Agreement already has a model release built in.

But what about when you start charging clients?

You’d still like to be able to use those images as well, right?

Now, not every paying client will allow that, however, there are plenty that will — but they need to sign a model release so they can’t claim later they never granted you permission to use their images (and sue you…ouch!).

My Model Release Bundle consists of:

Each one grants you permission to use specific kinds of images.

My General Model Release grants you permission to use any and all images from the shoot.

This is the one you want to try and get first because it grants you permission to use every single shot from the session for your marketing.

If you sense she’s uncomfortable with this arrangement, she may still want to grant you permission… but with just some of her images… the ones she's comfortable with letting you use.

This is when you present her with My Limited Model Release. With this release she can write down the file numbers of specific images she’s granting you permission to use.

If she’s hesitant with that then you can offer her My Anonymous Model Release which is any shot that hides her face, making her unrecognizable.

For instance, perhaps her head is cropped out of frame, or her face is hidden by hair, or she’s turned away from camera making her unidentifiable.

Wrapping It All Up

As you can see, the purpose of My Ultimate Boudoir TFP Agreement is to fast-track building your portfolio so you can quickly start charging for your boudoir photography.

Then, once you get paying clients, you’re still going to want to use their images but you can’t use a TFP agreement anymore, you’re going to have to switch to a model release.

That’s where My Model Release Bundle comes in.

Use any one to continue to update your portfolio because you’ll be getting better and better and improving your game with each and every shoot.

So, you get My Ultimate Boudoir TFP Agreement plus My Model Release Bundle as an added bonus for just $27.00

"My Ultimate Boudoir TFP Agreement will not only protect you and your work but will make doing trade shoots professional and hassle-free."

When checking out, be sure to select your method of payment by clicking the circle next to the appropriate payment icon.

No refunds on digital products.